By Jack RobLast Updated: September 22nd, 2022Categories: Biological
A List of Penguins With Yellow Hair And How Do You Classify Them

Penguins, the fixture of documentation for oceans and Antarctica, is the most adorable creature on that icy continent. The funny scenes of their waddles and huddles tug at our heartstrings. So cute!

While enjoying watching their cute and innocent faces, you may want to know their names so that you can find more videos and pictures about them online. Also, you can introduce them to family and friends.

How do you know the name of that penguin? Can you tell any features like yellow hair? After all, that’s one that you can see easily when all penguins have black or blue and white furs, that yellow hair is like a light in the darkness.

If that’s what you see from the screen – a yellow-hair penguin, you can find all the species that have yellow hair on their head, neck, chest, or crest.

The emperor penguin, the most famous penguin species in the world, is the one breed that we can find in the film series: Happy Feet. 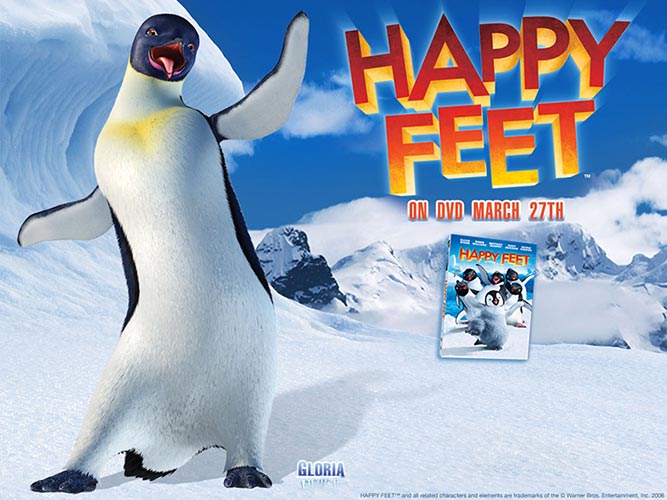 Like so many other penguins, an emperor penguin has black features on the whole back, a white belly, and black wings.

On the upper chest or we can say, under the neck, there’s yellow that pale downward. On the back of the ears, the features are bright orange-yellow, and the basic color of the beak is black with a line of orange(sometimes, pink or lilac) on the lower part of the mandible. 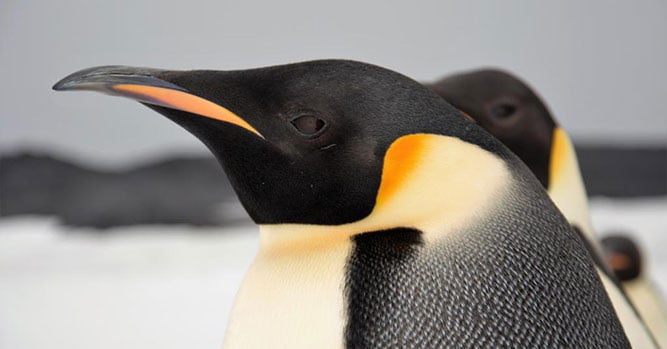 Emperor penguins are social animals and don’t have the habit of nesting. So, in the documentation, we can always see this scene: the whole colony is huddling on the icy shore. The adult penguins chirp to find the kid and partner after turning from the sea for food. The fluffy baby penguins covered with silver-grey features will “whistle” to get the parent’s attention after hearing the calls from their parents. Noisy but funny.

As the second heaviest and tallest penguin of living species, king penguins are considered the most gentle, elegant, and beautiful penguins.

Compared to emperor penguins, king penguins are sightly “slimmer”. Besides body sizes, you can also identify one from the color of the feathers. 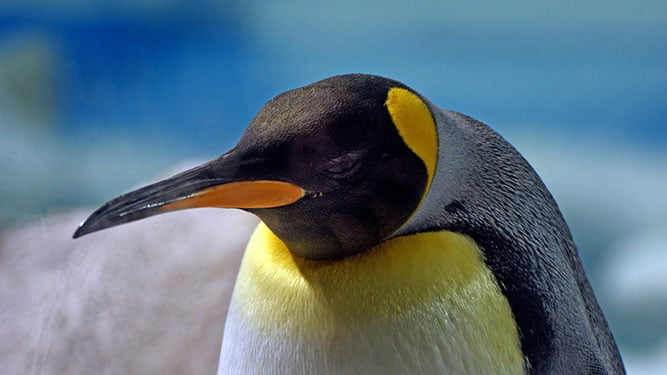 The emperor and king penguins actually have so many things in common, they’re both social animals, have no habits of nesting, and will huddle by the shore. One funny thing is that babies of king penguins are covered with brown furs, making them like look walking kiwifruit.

So, on the telly, if you see two penguins with yellow or orange hair caring a huge kiwi-like creature, they’re king penguins. 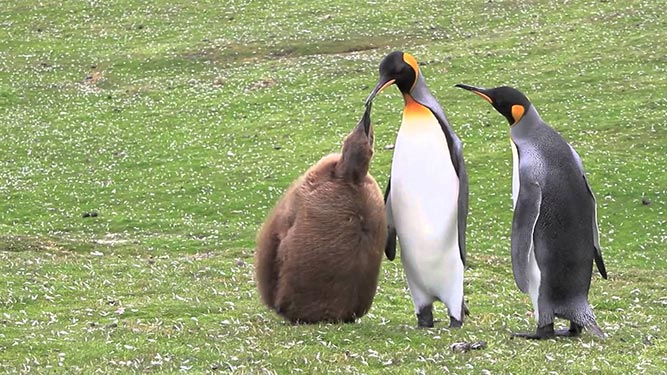 As one of the six crested penguins, the royal penguins breed mostly on Macquaries Island, a sub-Antarctic island in the southwestern Pacific Ocean, a part of Tasmania, Australia, about halfway between New Zealand and Antarctica. 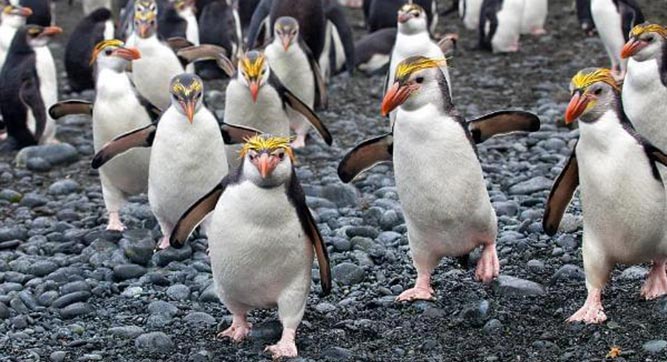 They are pelagic penguins, the ones that will dive into the ocean, swim, and search for food. Most of the time, they will be in the water. During the breeding season (starting from September), they will go ashore and raise a baby royal penguin.

If you got the chance to go to Australia or New Zealand from September to December, you may pay a visit to that island. It’s open for trips.

This’s believed to be a subspecies of the royal penguin, or, the other way round. They have similar body sizes, habits, and a typical yellow crest that arises from the center of the forehead.

How do we identify them? 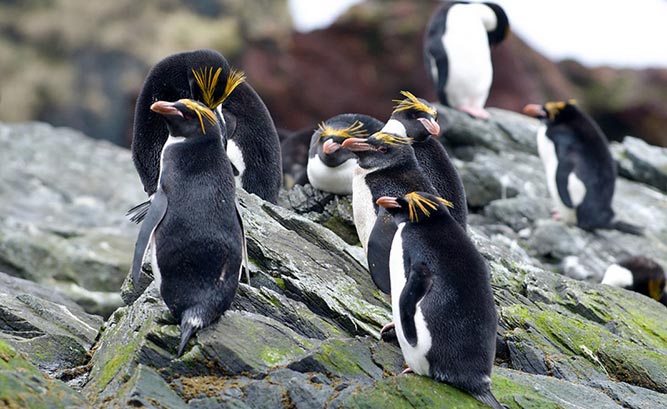 The name of this species is whimsical.

Back in the 18th century, when British sailors first saw this penguin that had a bright yellow crest like a slicked-back haircut, they called it “macaroni”, a term that was used to describe men who dressed in fancy and had a dramatic haircut.

If you want to see them in your own eyes, that’s not difficult. Macaroni penguin is the most numerous species among all penguins, with about 18 million individuals,  and we can see them in around 50 islands in southern Chile, South Georgia, South Orkney, and most areas in Antarctica.

The rockhopper penguin is the one that we usually see in animated movies and series, like Penguins of Madagascar and Happy Big Feet. Movie makers love to make rockhopper penguins talented dancers in movies as they’re the jumping champion among all species.

While most penguins stay on the plain of the shores, rockhoppers will not be satisfied with sea levels. They can, like their name suggests, hop over rocks and across pits to find loose rocks and caves on cliffs to build nests. 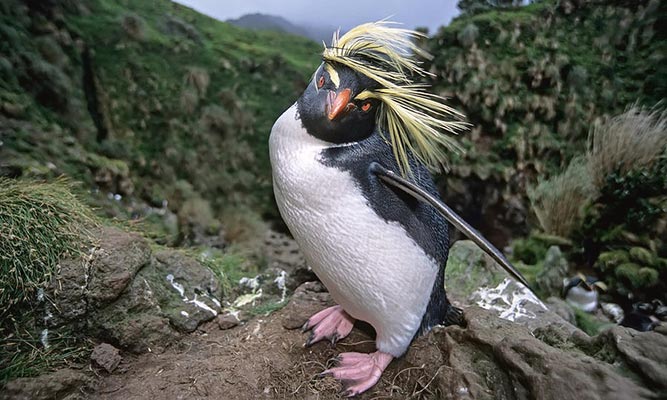 They’re separated and identified by the locations of their habitats:

They look similar too. Still, if you’re professional, you may be able to identify them:

How to Tell Macaroni and Rockhopper Penguins

Also, a lot of people will confuse a macaroni penguin and a rockhopper, after all, they have the same body size, feather color, and a yellow crest. Actually, it’s pretty easy to identify them by the yellow feather on their forehead. 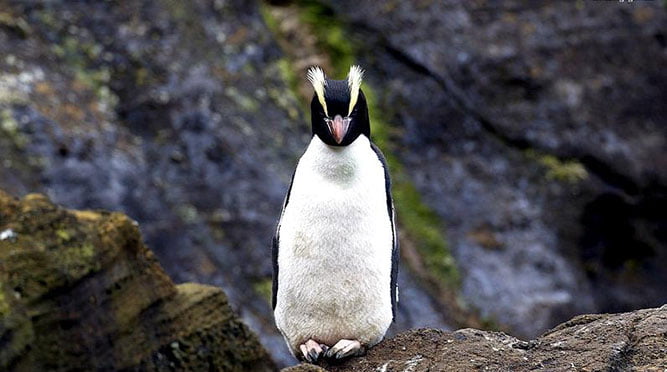 So far, people know so least about the erect-crested penguin as they’re rare. Since they’re endemic to New Zealand only, we can only find them on the Bounty and Antipodes Islands. The population of it is believed to be declined due to the frequent human activities around the region.

They’re one of the species that has the least individuals among all penguins now. If you happen to see them on your trip to New Zealand, just stay there and watch them. Don’t come any closer and feed them – so far, we don’t know what they eat mostly.

Only endemic to the Snares Islands, a group of islands right below the South Island of New Zealand, the Snares Penguin is a very rare species that there’re only around 50 thousand individuals worldwide. That number is getting smaller when the effects of human activities and climate change are getting stronger.

Compared to all the other crested penguins, the Snares Penguin has a medium size, 50 to 70cm (19.5–27.5 in), and a weight of 2.5–4 kg (5.5–8.8 lb). You can hardly recognize them by their size. Also, they have a similar yellow crest like a rockhopper, two tufts of long drooping eyebrows above the eyes. 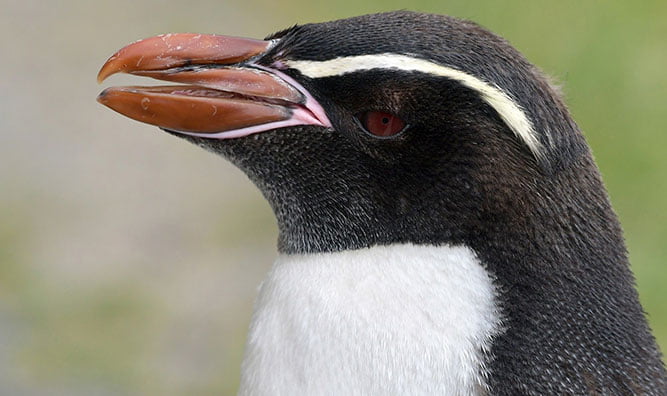 One of its unique features is that around the base of its large beak, there’s this bare pink hairless skin.

Other than these, it has a similar appearance to other penguins, including a black head, wings, and back, a white belly, and pink feet. So, there was some debate on the classification of these penguins. Some thought it was just a branch of a rockhopper. Later, some anatomical proofs were found to support that this is a special species.

You can’t find this species in zoos, they will never breed in captivity, yes, we’re talking about this rarest penguin, the yellow-eyed penguin.

They are the only existing breed of the genus Megadyptes. It’s believed that before any westerners came, the yellow-eyed penguins were everywhere in New Zealand, both South and North Islands. However, after over 200 years, all of its relatives are gone and the yellow-eyed penguins are only viewable on the islands on the eastern and southeastern coast of New Zealand with an estimated population of 4,000. 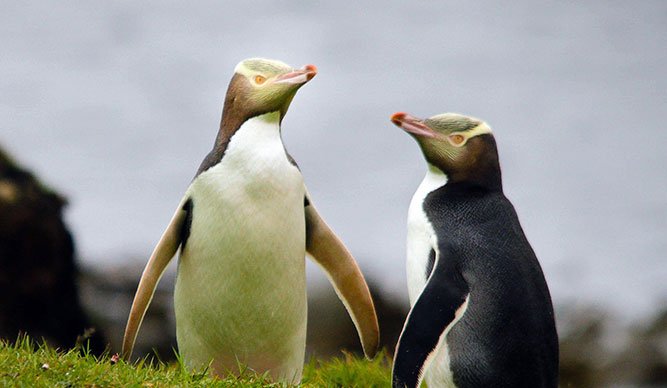 The yellow-eyed penguins can be easily identified by

The yellow-eyed penguin is the largest living creature among all the penguins found in New Zealand. With a maximum of 79cm (31in) and 8.5kg (18.7), the yellow-eyed is also the fourth or fifth largest penguin on the globe.

What type of penguin is Happy Feet?

Also, the funny and cute Lovelace is a rockhopper penguins.

How many types of penguins are there?

There’re 18 species of living penguins now, and most of them can only be seen in the southern hemisphere. Only one – the Galapagos penguin is found in the other hemisphere.

Are rockhopper and macaroni penguins the same?

No, rockhopper and macaroni penguins are different, though there’re discussions on whether their relative pieces.

From their size, we can tell that both species are different: macaroni (61-69cm) is larger than all rockhopper penguins (45-58cm).

Why Do Penguins Have Yellow Hair?

According to many penguins researchers, penguins grow their yellow hairs to make them attractive and mate.

Based on a spectroscopic analysis of macaroni penguins’ crest feathers and king penguins’ neck feathers, researchers found that the yellow features found on penguins are completely different from the yellow hair of all the other birds.

In birds, most yellow or similar color hairs come from food – birds eat something that contains yellow carotenoid pigments, like seeds, fruits, insects, etc. As a result, birds will have bright yellow feathers.

However, as discovered, nothing on penguins’ food list contains such a yellow carotenoid pigment that makes feather yellow. It’s believed that penguins will grow yellow hairs with internal pigment.

And the brighter the yellow hairs are, the most chance that a penguin will be loved by other penguins, and have more chances to mate.

Why is sea water salty?

The two ions that are present most often in seawater are chloride and sodium. These two make up over 90% of all dissolved ions in seawater making sea water relatively salty.

What are the 3 sources of marine pollution?