For bourbon lovers, there was a new bottle coming out several years ago, the Blade & Bow. It’s so young that most of us don’t have the chance to take a sip.

So, how does it taste? Is it worth the price? Today, we are going to unveil everything about this bottle, including the reasons for it getting famous, the taste, and the price.

First of all, let’s get to know some fundamentals of this bourbon whiskey.

Part 2: The Origin(story) of Blade and Bow

Speaking of Blade and Bow bourbon whiskey, the distillery that makes it must be brought out: the legendary Stitzel-Weller Distillery. That’s the name of a traditional bourbon distillery located in the suburb area of Louisville that has created multiple famous bourbons like: 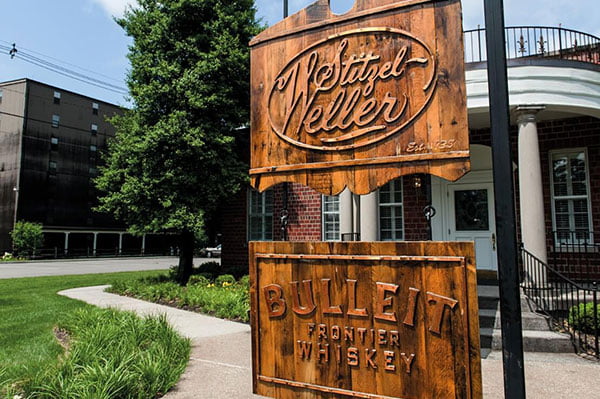 It was founded by Julian Pappy Van Winkle Sr. and Alex T. Farnsley, and Authur Phillip Stitzel on Derby Day (May 5) in 1935, but later was sold in 1972 and finally closed in 1992. In 2014, Diageo, one of the biggest beverage alcohol companies, invested in the facility and reopened it.

In 2015, the first bottle of Blade and Bow was released under the banner of “A proud tribute to the renowned craftsmanship of the legendary Stitzel-Weller Distillery”. But in fact, the Blade and Bow is just a new brand created by Diageo, not Stitzel Weller.

Part 3: The Nosing and Tasting of Blade and Bow

Take a glass, open the bottle of a Blade and Bow, pour some, and take it close to the nose. There are some notes of honey, citrus, apple, and a bit of grassy. Overall, it’s an elegant nose with attractive fruity, sweet aromas.

Take a sip. It’s a very friendly start: sweet, smooth, and a bit floral. I feel a bit spicy with a peppermint hint. Not aggressive at all, instead, refreshing.

The mixed fruity taste, apple, citrus, and peach, makes the drink really pleasing. That sweetness and slightly spicy are having a perfect balance. Mild and smooth. 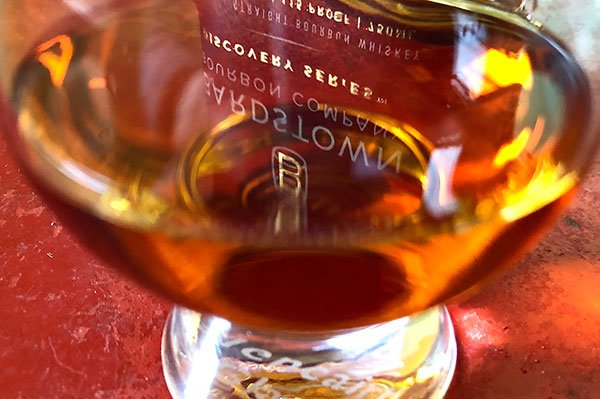 Wrapping: A good sipper with fruity and floral notes. It’s a bit sweet and spicy, not alcoholic at all. Perfect for those who love light bourbons.

Blade and Bow is also famous for its special aging process: Solera System, a process for aging liquids like sherry, wine, beer, and port wine.

In the US, only two brands of bourbons are made from the Solera aging process, Blade And Bow and Hillrock.

According to some bourbon reviewers, they think the blending of the oldest and latest bourbons will actually water down the taste of the oldest ones that are used for bottling each year. 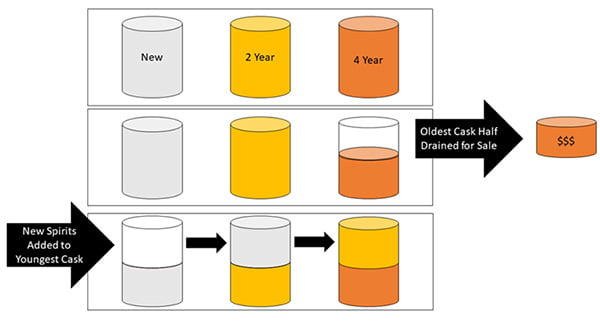 The Five Keys of Blade and Bow Straight Bourbon

Every bottle of Blade and Bow has a brass key attached to it. There’re 5 different keys in total, so if you love the collection, you need to buy at least 5 bottles to collect the 5 keys. 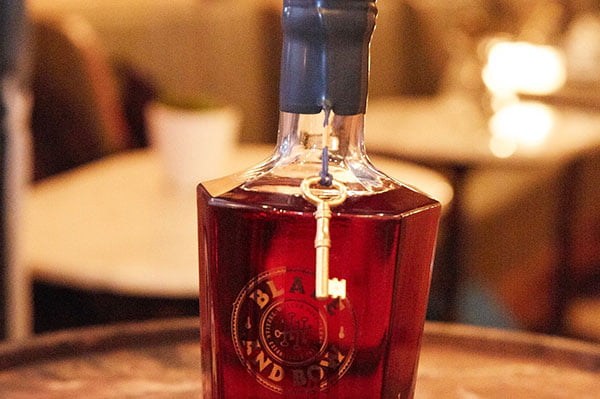 Back in 1935, the founders of Stitzel Weller hung 5 keys on the door of the distillery. The 5 keys represented the 5 most important things for making a bourbon whiskey: grain, yeast, fermentation, distillation, and aging.

After Diageo decided to reopen the distillery, they decided to use that story for branding and that’s what you can get after buying a bottle of Blade and Bow: a brass key. Also, take a closer look at the bottle, you will see that Diageo also prints the meanings of the keys on the surface of the bottle. 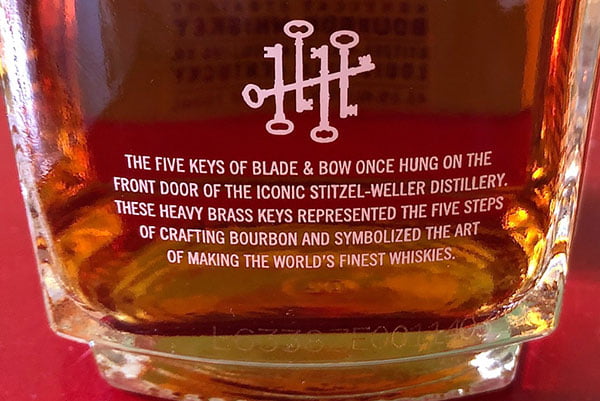 There’re only two variants for Blade and Bow, apart from the one we’re introducing today, there’s another one: the limited Blade and Bow 22-Year-Old Kentucky Straight Bourbon Whiskey, very rare and expensive. This is a spirit that is named the best straight bourbon and won a double gold medal at the 2015 San Francisco World Spirits Competition.

It’s so rare that 99% of whiskey lovers never get the chance to have a sip. Also, the price is one reason that stops us from buying one: starts at around $500. Since it’s only available in certain stores, some stores will price it over 1000 bucks. 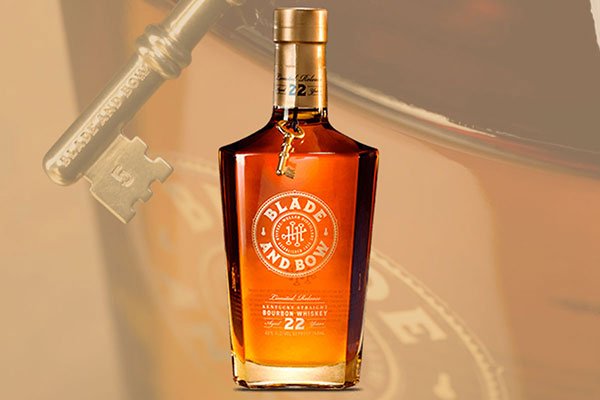 For the Blade and Bow 22, some enthusiasts say they will spend any price of getting a bottle for its uniqueness.

How Blade and Bow 22 Is Made

After Stitzel Weller Distillery was closed in 1992, whiskey production was still ongoing. Quite a few of Bulleit and other bourbons were still fermented and aged there.

Producers there didn’t sell all bourbons. Some oldest barrels (barreled in around 1990) were still aged there for years. In 2015, Diageo decided to open the barrels and bottle the 22-year liquors.

Frankly, it’s a good sipper indeed. But I’m afraid that it’s not worth the price. You can find a lot of good alternatives at a more pleasing price. 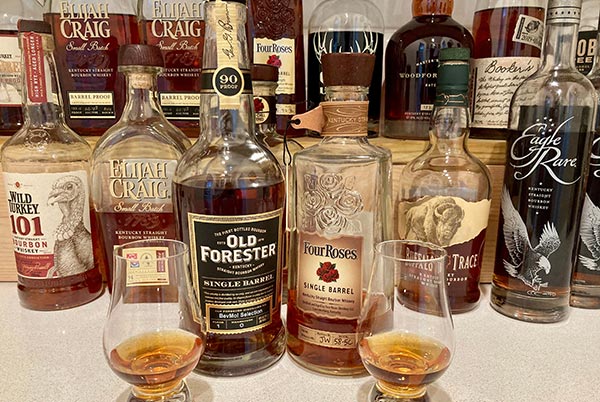 Still, if you were trying to have a little gathering with your family or friends, Blade and Bow could be a good bottle for you to break the ice. You may introduce the story of this bottle to them. Moreover, the story of the Stitzel Weller Distillery is pretty good too.

What happens if you get all 5 Blade and Bow keys?

According to Elizabeth Dowell, the brand home manager of Stitzel Weller Distillery, once you get all the 5 keys of Blade and Bow, you can be a member of their Five Key Clue. There’s a room at the distillery, you may pay a visit there and show them the five keys. They will make you a golden cup (just the color) that has your name printed on it.

Does Blade and Bow have Pappy in it?

The last several thousand barrels of Pappy made in Stitzel Weller Distillery were aged there even after it was closed in 1992. In 2014, the distillery was reopened by Diageo.

For both Blade and Bow variants, we have no clue whether they have any drops of Pappy. Diageo never mentioned anything about that. The NAS of the 22-Year-Old is clear which is 22 exactly, it’s more likely to contain drops of Pappy. But there’s no age statement for the standard bottle. Maybe it will have a few drops of Pappy due to the Solera again system.

Is Blade and Bow made by Weller?

Blade and Bow is fermented, distilled, barreled, and bottled in the Stitzel Weller Distillery, owned by Diageo.